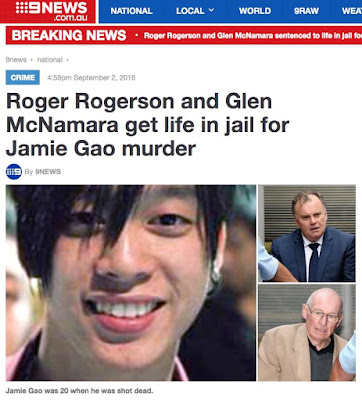 Gao, a 20-year-old university student, was shot dead on May 20, 2014 after the men lured him into a Padstow storage shed with promises of payment for drugs.

The men killed Gao in a premeditated act in order to steal 2.78kg of the drug ice, a quantity with a potential sale value of more than AU $9 million.

In the NSW Supreme Court today, Justice Geoffrey Bellew said the murder was of "an exceptionally high degree of seriousness in offending – brutal in its execution and callous in its aftermath".
Read more at http://www.9news.com.au/national/2016/09/02/13/43/roger-rogerson-and-glen-mcnamara-to-be-sentenced-for-murder#zuxBv4Aid6u18AGx.99
Posted by Shadow Catcher at 12:13 AM 0 comments